How to Build Mass with Bodyweight Training

There is one way to build muscle, and one way only.

We stimulate new growth by adding resistance, and that resistance isn't partial to iron plates or our own bodyweight.

So whether you’re aiming to add 5 pounds to your bench press or pushing toward doing an extra rep on one arm push-ups, your body will have to adapt to the new stimulus.

That’s where most bodyweight training programs have it wrong.

With that said, I want to go over 3 factors you’ll need to consider if you want to maximize growth with, primarily, bodyweight workouts.

Some experts define volume as “the amount of exercise you perform over a given time.” The idea here is that volume is determined by adding up the total number of reps performed in a single training session (sets x reps = volume).

Personally, I like to factor in the amount of weight lifted (sets x reps x weight = total volume).

In my opinion, this allows for a more accurate calculation of progress, specifically with bodyweight training.

The Importance of Training Volume

The muscle building process, when it comes to resistance training, is quite simple. We stimulate the muscle using a given stress (weight), our body then adapts to the stress by building new muscle mass in order to handle it.

If we, for example, perform bodyweight pull ups (135 lbs bodyweight) x 4 sets x 8 reps (each), our total volume is 4,320 lbs. We now adapt to that stress (total volume) in preparation to handle this stress again. If we go in the gym (or the park, or your living room) again the following week and perform the same total volume on the pull ups, our body has no reason to adapt and thus we’re only working hard enough to maintain the gains we’ve made.

What about increasing the number of sets?

Sure, this can be done, but studies show that it’s only possible to a certain degree before we experience diminishing returns.

When it comes to bodyweight training, however, since we are limited to the amount of weight we can increase, adding sets would be the next best thing.

Now let’s consider a bodyweight exercise that is, in most cases, a lot easier to perform.

Surely the total volume would be higher…

Let’s ignore that fact that, from a biomechanical standpoint, this would be comparing apples to oranges because the bench press will require more core strength, stability, and range of motion to perform.

It’s why my 100 pound son can perform 10 push-ups but would get crushed under a 100 pound barbell on the bench press.

But that’s besides point.

The point is, according to this study, you would have to perform 3x the total volume, when using a lighter weight, to get the same exact results you would from a moderate load. Making light load training (bodyweight) effective but extremely inefficient.

This study showed similar findings when they compared a low, moderate, and a high rep group. The difference here was, the low and moderate rep groups produced significantly more hypertrophy than the high rep group.

Again, bringing me back to the point I made earlier.

Unless we even the score…

It’s not hard to see that the main differentiator, in terms of building muscle mass with bodyweight vs traditional weight training, is intensity.

The amount of physical power (expressed as a percentage of the maximal oxygen consumption) that the body uses when performing an activity.

Using a percentage of your 1RM.

An example of using a percentage of your 1RM would be; let’s say your max bench press is 315 lbs. Then you might use, for example, 80% of your 1RM for 5 sets of 5. This might translate to something like 252x5x5.

Unfortunately, when it comes to strictly bodyweight training, intensity remains the same and cannot be manipulated to any significant degree.

That is of course, unless you’re able (or willing) to add intensity in a non-traditional fashion by:

(a). Altering your technique so that more work is performed through a decrease in leverage.

For example, you may consider wider grip push-ups over the traditional push-up (if you’ve already become extremely proficient at it).

(b). Adding weight with a bar of gym equipment.

Note: For the best (and safest) results, focus on maintaining overall form and technique while increasing the load slightly over time. Sacrificing form in order to move more weight is not only unsafe, but defeats the entire purpose of adding the weight all together.

Although this, in my opinion, still does not bridge the gap between weights and bodyweight, it certainly gets us closer.

But why stop there?

Another major contributing factor to muscle hypertrophy that can be implemented with bodyweight training (or calisthenics) is frequency.

Refers to the number of training sessions within a given time frame, such as a day or a week.

This study published by the Journal of Strength & Conditioning Research compared a 1-day per week training frequency to a 3-days per week while keeping volume constant between both groups. They found that a higher frequency of training, despite no difference in total volume, produced more gains.

This is, in my opinion, due to a few factors.

Take one individual who is training their chest on Monday and performing 12 total sets. It’s pretty safe to say that, by the middle of the workout, the pecs will be fairly fatigued and unable to perform at their peak. (See chart below) 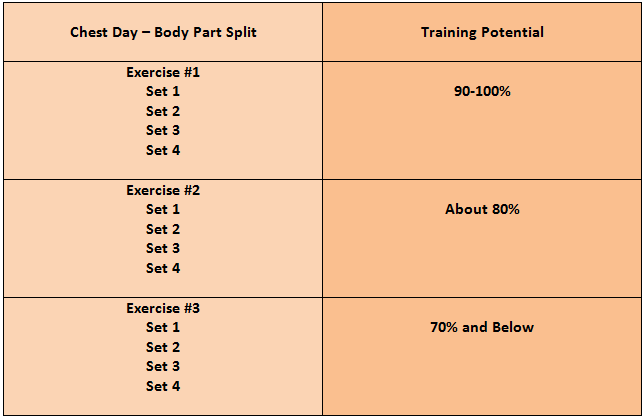 Let’s take the same individual and split his 12 sets of chest training up evenly over 3 days. It’s pretty safe to say that, despite the number of sets being identical, the total volume will be higher due to all of their chest training being done in a potentiated state. (See chart below) 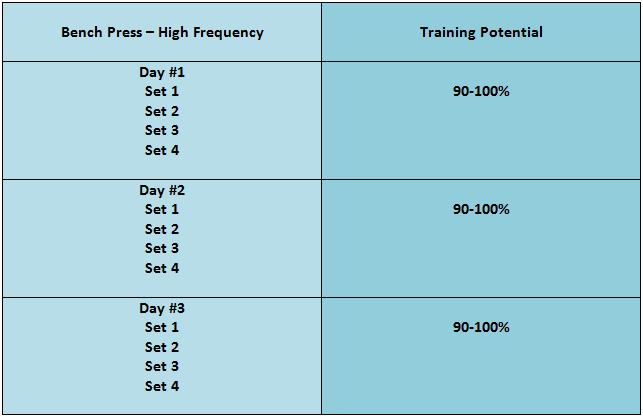 In the past you’ve probably been lead to believe that, if you train a muscle-group more than 1-2 times per week, you’ll overtrain and ultimately end up doing more bad than good.

Although this could be the case if the muscle is trained too intensively for too long without a back off week or a deload, it’s going to be less likely with bodyweight training where intensity isn’t quite as high.

This idea of overtraining being a result of training a muscle-group more than once per week has been debunked.

Take this for example:

With respect to cellular adaptations there is evidence of longitudinal addition of sarcomeres and adaptations in the inflammatory response following an initial bout of eccentric exercise. Addition of sarcomeres is thought to reduce sarcomere strain during eccentric contractions thereby avoiding sarcomere disruption. Inflammatory adaptations are thought to limit the proliferation of damage that typically occurs in the days following eccentric exercise. ~ The Nicholas Institute of Sports Medicine and Athletic Trauma

Science has demonstrated, what they call, The Repeated Bout Effect.

Although this effect does still require an adequate rest period between bouts, training more frequently will increase your ability to recover and adapt.

The synthesis of muscle protein is essential to the body's ongoing growth, repair, and maintenance of its skeletal muscle groups.

So going back to chest training, let’s look at what that might look like for someone training their chest 1x per week vs 2x per week.

The chart above illustrates elevated rates of protein synthesis in an individual who trains his chest (for example) once per week. MPS is typically elevated for 24-36 hours (48 hours maximum) and then drops back down to baseline for the rest of the training week.

This chart illustrates elevated MPS in an individual who trains his chest twice per week. In this case, the trainee is doubling the amount of time he/she is spending in an anabolic state (building muscle).

At this point you figure that, if you focus on increasing total volume, add a bit of intensity by altering your technique or adding bit of weight (suing the strategies listed in the Intensity section of this article), and train each muscle-group 2-3x per week, you could then expect the same results as someone who’s weight training.

The Bad News
We haven’t quite bridged the gap.

The Good News
We are about to get closer.

Although training to failure for someone who trains primarily with weights, at a respectable intensity, is not something I recommend, my views do differ a bit when it comes to lower intensity (bodyweight) training.

This is because it has been shown that we can only expect a significant elevation in MPS for trainees working with 70-90% of their 1RM. While MPS was considered “negligible” in trainees who used 20-40% (with workload being equal).

But low-intensity exercise performed to failure equalizes this response.

With that said, in the case of bodyweight workouts, training to failure, regularly, is recommend (by me).

How to Maximize Gains with Bodyweight Training

Grab this done-for-you bodyweight training program that prescribes a high frequency approach, and aim to increase total volume (while taking into account intensity) over time.

As you get more and more proficient with the basic movements, start implementing the 3 bodyweight amplifiers that we'll talk about tomorrow to challenge yourself a bit more. This will allow you to continue to progress without having to train for hours per day while experiencing significantly diminished returns on your time. 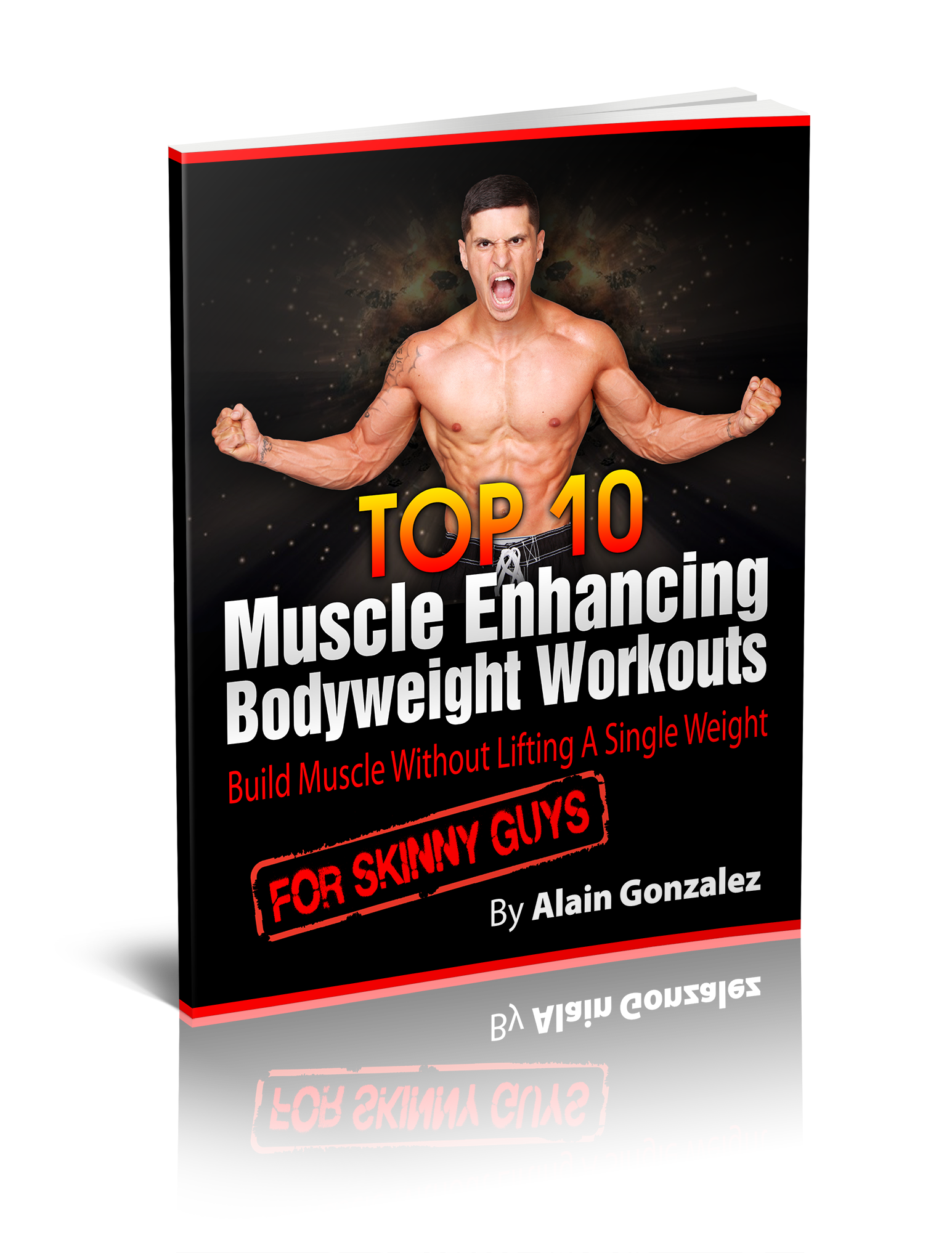